Day #1: The Pause between the title cards

I love pretty much everything about Star Wars, but there is nothing I love more than the moment of silence and darkness between this: 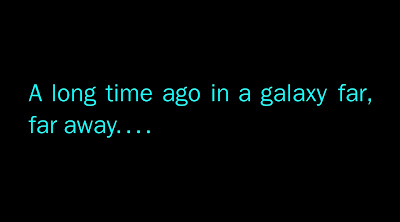 and when the Star Wars logo goes flying into the screen to that first blast of John William's score.

That moment, that pause of sheer anticipation will always be one of my absolute favourite things in the world. In a crowd of Star Wars fans at a midnight show or Star Wars In Concert or [insert any excuse to watch Star Wars in large groups here] the reaction is always the same:

The crowd will clap, cheer and generally be totally excited as the 20th Century Fox and LucasFilm logos play, and will continue this moderate level of noise until the "A long time ago in a galaxy far, far away...." card fades.

Then there is silence. The entire audience leans forward, waiting for the familiar, joyful beginning to the movies we all love. My heart races. The movie has started, but it hasn't really begun until-

And the theatre erupts in noise, a single chorus of joy of hundreds of people thrilled to be watching Star Wars as part of an audience. Then the crawl begins and the audience returns to respectful silence, everyone reading the three paragraphs that tell us all we need to know to be introduced to that galaxy far, far away...
Posted by Julian at 9:00 AM